This perciform fish is usually found in the northern regions of America and Canada, and can be near impossible to locate during the daytime. Generally the fish grows to become up to 30 inches in length and about 15 lbs in weight, however the maximum recorded weight is 22 lbs 11 ounces. Obviously the fish doesn’t have walls for eyes, but there is a reason behind the name of the creature. The “wall” is actually referring to a quality of the fishes’ eyes that allows it to reflect minute amounts of light like a cats’ eye. This allows them to see more acutely in dark and near-dark conditions, which can be a great advantage for a predator to sneak up on an unwitting food fish.

Having trouble finding that ever elusive walleye? Well look and see if the sun is up, if so that could present a problem. With this fish’s exceptional eyesight one might think that he would use it during the daytime so he could see better, but this isn’t true. He actually uses his gift between dusk and dawn because it gives him an advantage over other marine biology that can’t see as well during those times. Walleyes tend to feel more secure in the dark, as most other predator fish can’t see as well as it can in those unilluminated situations. Also, a good fisherman will take into consideration more than the time of the hour, as water and weather conditions play a great role in the Walleye’s activities on a day to day basis. For instance, they are more active in turbid water, also known as “Walleye chop,” which is a 5-15 mph wind disturbing the water column. If it is cloudy or overcast they may even hunt during day hours, and a peaked large moon tends to make them more active. Maybe you won’t have to trek to the water’s edge at midnight if the conditions are just right, and that decision is part of what makes a great fisherman.

So when conditions are prime and you begin your search, keep in mind that this is a predator fish. It likes to eat other little fish, minnows, and you may even find success with a small fish like lure. Using a rapala number 13 is the standard size, where a number 18 would be the largest artificial bate that you would want to use. Nighttime Walleye fishing is mostly done in shallow waters of about 15 feet in depth or less. You can use a sonar device to locate a concentration of Walleye before casting, but either way you’re going to want your lure somewhere between 1 and 3 feet from the bottom. This ensures you that you can miss most of the obstructions on the floor, and leave the line open to feel the light tick of a Walleye bite to set the hook well.

Even though this seems to be one of the most elusive fish to catch, it is still one of the most sought after. Often regarded as the best tasting fresh water fish you can find, it is fished recreationally and commercially. Because of the high number of anglers aiming for this tasty morsel, fishing for walleyes tends to be regulated by some form of natural resource agency. This places quotas and length limits on amounts and size of walleye allowed to be kept. Usually fish less than 13″-15″, depending on your location, are not allowed.

Now you’re on your way to becoming an expert Walleye fisherman. Remember to be safe in low-light conditions, and always be aware of underwater hazards.

Brooks — People in this Waldo county town are reeling after a… 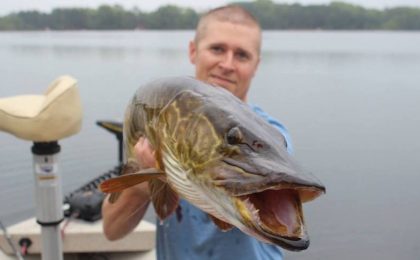 For the Week Starting: 1.22.2019 O thou side-piercing sight! Edgar in Shakespeare’s…